The BMJ Christmas edition has reported "mounting accounts of less child-friendly activity" regarding the tooth fairy, who was once regarded as kind and giving.

Researchers from across London became concerned following misdemeanors of the mythical character. One boy in particular became extremely distressed because the tooth fairy "had put a tooth in his left ear," after he left it under his pillow. Further investigation turned out he was right.

Further supporting their evidence are two other cases showing teeth being found in the esophagus and a man who developed an abscess after placing his child's tooth in his nipple piercing so it could be "near to his heart."

The researchers conclude that as there ...

We love helping our patients get the whitest smile possible. This patient took advantage of our Tuesday special: $100 off Zoom! Whitening Treatment. She walked out of here with her teeth 1 1/2 shades lighter!

After, shade B1 (and teeth are even a little bit whiter than the sample tooth)

WE'RE BACK FROM VACATION AND NEED A LITTLE LAUGH 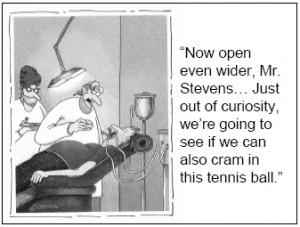 FEEL THE EFFECTS OF LAUGHING GAS MORE THAN WOMEN?

A study by the Department of Anesthesiology at Duke University Medical Center in Durham, North Carolina believes that gender appears to be an important variable in recovery from general anesthesia. These findings may explain the increased reported incidence of awareness in women and support the need to include gender as a variable in pharmacokinetic and pharmacodynamic studies of anesthetic drugs. That is, the study of what a drug does to a body and what a body does to a drug.

Even though gender could make a difference in the conclusion of studies using nitrous oxide, it appears that gender doesn't makemuch of a difference. Only one study, using only men, which took place at ...

IMAGINE...CLONING JOHN LENNON FROM HIS TOOTH

The man who bought John Lennon's molar two years ago--Canadian dentist Michael Zuk--is seeking headlines again, putting out a press release and launching a website indicating his intention to extract DNA from the tooth with the lofty goal of cloning the legendary musician.

At the time of the tooth's sale, Rolling Stone magazine reported Lennon's molar was too fragile to be DNA tested to confirm it belonged to Lennon. However, Zuk now contends he has hopes to "fully sequence" Lennon's DNA. "With researchers working on ways to clone mammoths, the same technology certainly could make human cloning a reality," he said in a statement. "To potentially say I had a small ...

We are thrilled to report a monumental milestone for North Palm Beach Dentistry....

We hit 1000 patients!!! (Actually, by press time of this blog, we have surpassed that number, but this is a big deal to us so we're going to go with it.)

Ken first came to us when he brought his son in for an exam. He then came back in for a new patient exam and cleaning for himself. It was at this appointment we notified him that he ...

ZOOM! BEFORE AND AFTER

This patient first came to us for a new patient exam and cleaning and she was excited to hear that we offer Zoom! Teeth Whitening. She took advantage of our Tuesday special $100 off Zoom! Whitening (Tuesdays only).

Her teeth turned several shades whiter and she walked out with a confident, happy smile!